Atlantans Fight for $15 on National Day of Disruption 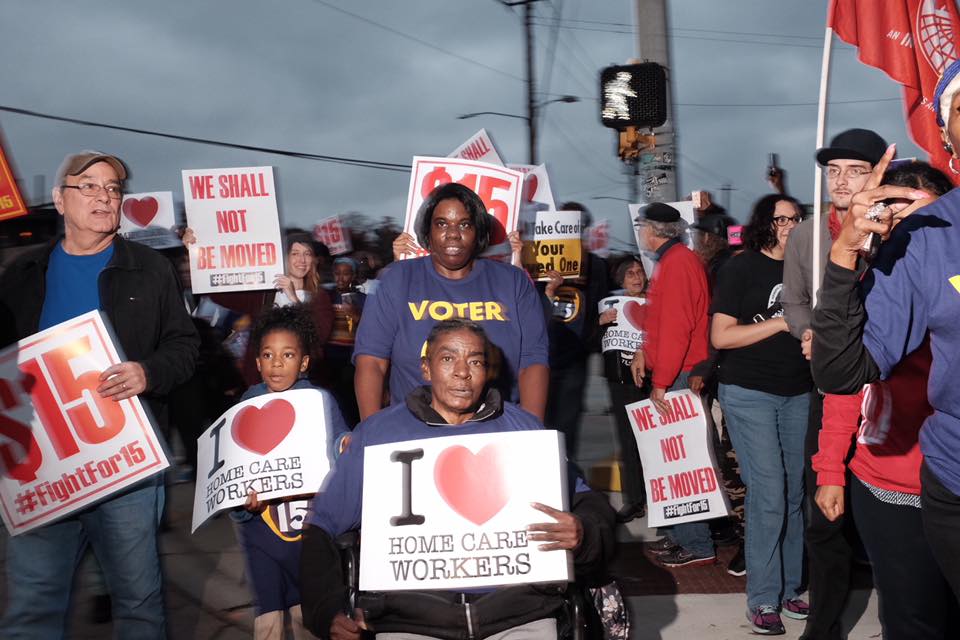 In coordination with “National Day of Disruption” actions throughout the country, Atlantans demonstrated on Nov. 29 for a living wage of $15/hr and a union for low-income workers employed in jobs such as fast food, home care, and airport services. The day started with a 6 a.m. “strike line and pray-in” by clergy that State Sen. Vincent Fort (who attended all the Atlanta actions) called “very successful.” A spirited group of about 50 led by Atlanta Raise Up, the Service Employees International Union (SEIU), Teamster Local 728 and others demonstrated at the Atlanta airport at mid-day but were aggressively dispersed by police after only eight minutes. Some 100 regrouped on Ponce DeLeon Ave. that evening, energized by drummers from the Carver High School band. Marchers who had assembled at the Open Door Community and the “Murder Kroger” parking lot converged and proceeded down the avenue to a nearby McDonalds, where 15 people were arrested for sitting down at the entrance, including a legal observer and one man carrying an IWW flag who said he had been obeying police orders to stay on the sidewalk. MADSA members Eduard Loring of the Open Door and food service worker Dani Atlanta were among those arrested. Reuters reported “scores” arrested at similar actions in other cities. Atlanta Raise up posted: “We occupied space and let Atlanta and the world know that #PovertyWagesDontFly #FightFor15