MADSA’s December general meeting, held at our downtown office, featured a holiday potluck feast and socializing in addition to a few business items and reports from working groups and committees. By breaking into groups of four we got to know some fellow members better, including new comrades from Athens (one plans to run for county commissioner!) and Kennesaw.

We also heard about plans for another break-light clinic in January (Mutual Aid WG); ongoing canvasses for Bernie; joining actions with our allies against climate change and a proposed Ga. Power rate hike, plus a popular ecosocialism book club (Ecosocialism WG); planning for public and internal education programs in 2020 (Education WG); a new MADSA YouTube channel, ready for your contribution (Digital-Communications Committee); and outreach to increase member engagement (Membership Committee). All members are encouraged to join these groups. Announcements included an Afro-Socialism group party, and the Housing Justice League’s City Hall protest against displacement of inner city neighborhoods by gentrification. We learned a lot but also had lots of fun! 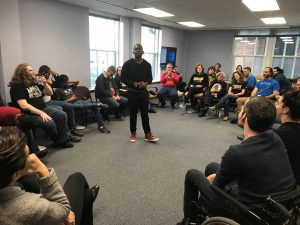