Speaking Out Against Shelter Shutdown

MADSA members joined Black Lives Matter Atlanta, Justice for All Coalition, Solutions Not Punishment Coalition (SNaPCo), Women on the Rise, Racial Justice Action Center, Lawyers United for a New Atlanta and other community organizations who rallied at Atlanta City Hall Oct. 3 to oppose legislation proposed by Council members Kwanzaa Hall and Alex Wan that would permit the City to move towards acquiring the Peachtree-Pine homeless shelter for the purpose of building a massive police facility. The rally and educational speak-out was followed by people packing the City Council chamber for their meeting at which the ordinance was to be voted on. Photo: Lorraine Fontana 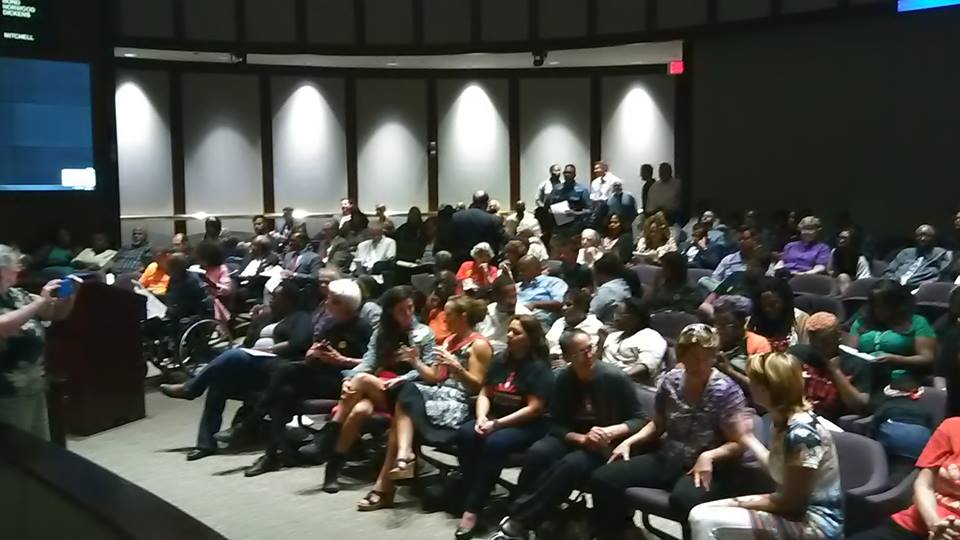 During the time allotted for public comments, among many moving speakers opposing the closing of the shelter (no one gave a public comment supporting the closing) was Fight for $15 activist Dawn O’Neal. She told Council President Ceasar Mitchell that at one time while she was his daughter’s substitute teacher she was actually homeless and earning only $8.50 an hour. After the public comment period, many audience members broke out into vocal protest, chanting “Vote! Vote!” and one person was arrested. See the Atlanta Progressive News report for details. The ordinance passed, with Council member Felicia Moore the only dissenting vote. Meanwhile, the Task Force’s lawsuit disputing the ownership of the property is still going through the court system. Photo: Marshall Rancifer